It took a long time, but finally here it is. I was asked to review "NetBeans IDE 7 Cookbook" by Rhawi Dantas from Packt Publishing and it took me more time than expected to finish, due to too many other tasks at hand (JavaOne anyone?). First things first - having read through the book I actually think the title is a bit unfortunate, since it suggests content you may not find in there. Reading "Cookbook" in the title I assumed to see "recipes" how to solve problems that the everyday user encounters. But in fact I think it somehow feels more like a tutorial - not that this is a bad thing - I was just thinking about consumers expectations. So, with this book being more of a tutorial, what is the target audience? Well thinking about the stuff I read in there I would suggest it to be a good pick for new or not advanced users. An intermediate user is someone who only knows about parts of the IDE, e.g. SE stuff not EE. If you are using NetBeans in your day job for more than 2 years I would assume you will not find so many new things in there.

So is this book for you? If you are new to NetBeans and want a thorough introduction without reading multiple tutorials, which are available from the NetBeans project homepage, this book may be for you. The tutorials may be more detailed, but I think I like the all-in-one experience of the book. So probably start with "recipes" in the book and if you like what you see dig in deeper using the tutorials from the NetBeans homepage.

You are expecting a rating? Well for new NetBeans users I think it is well above average, for advanced and experienced users it is probably a bit below (depends on your IDE usage patterns I think).

So, what is covered in this book? It is a broad range starting with a quick intro, moving on to the core features of the IDE. One chapter explicitly looks into Matisse, the NetBeans UI design tool. The obligaotry JEE things are in there, as well as a nice primer for how to use JDBC inside NetBeans. The chapter about JavaFX is already outdated, an introduction to mobile development is available. I really like the chapter about refactoring Java code (stay tuned NetBeans users - Jackpot will be back...). What I did not expect after the first few chapters is to have information about extending the IDE (simple but good) and about profiling (although there is more to it than written in the book). Finally there is a good intro into the usage of version control systems with NetBeans (reminder GIT is now available as well).

Anymore to say about the book? ... No, I think this is good - so get the book, if you want to learn NetBeans!

I am currently reviewing

With no sessions selected for JavaOne 2010, I thought I would try a new approach:


Build proposals around things I would attend at Javaone.
Well, to say the least - it worked out, probably too good. So here is the official list
Session 23923 - JVM Language Mashup Using NetBeans RCP
Session 24027 - Setting Sail: Opening New Horizons in RCP Development
Session 24034 - Next-Generation UI: JavaFX 2.0 and Scala?!
Session 24822 - The Final Frontier: Rich Client Platform with JavaFX 2.0
Session 25026 - The Enterprise RCP: NetBeans RCP with JavaFX 2.0 Controls
Anything in there that attracts your attention?
Anything you would like to see in there?
See you at J1- or stay tuned for further details on the sessions....
Posted by Sven at 1:40 PM No comments:

After a real long time with no activity on this blog, I think it is time to get busy again. New things coming up, new technologies to evaluate...


there may some interesting blog posts in my queue.

Welcome back and stay tuned...
Posted by Sven at 12:09 PM No comments:

The loss for Sun is the advantage for the DreamTeam. Now that Bruno is no longer a Sun employee he was immediately invited to join the NetBeans DreamTeam - and he accepted.
Welcome back on board, Bruno!
Posted by Sven at 12:15 PM 95 comments:

I know you have expected to read about days 4 and 5 of Devoxx 2009 here, but there are more important things to blog about.
Bruno Souza, founder of SouJava, known as "Brazil's JavaMan" has left SUN. But I suppose this is nothing to keep him from being an (even more) outstanding member of the Java community. 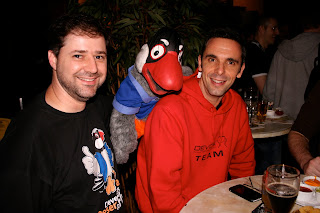 In case you are wondering - Bruno is the guy on the left,
Stephan Janssen on the right and Juggy in the middle!
Bruno, lets meet again at Milliways, The Restaurant at the End of the Universe (always near in space)!
Oh, and bring Juggy along, rrrright?
Braziiiiiiiiiiiillll!!!!
Posted by Sven at 4:08 PM 1 comment:

Day 3 is the first real conference day. It started with a keynote 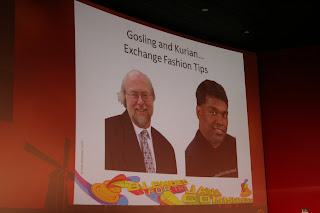 from Oracle which really gave no real new insights, since nobody is allowed to say anything at all. But just in case - a subset of the slides is available here. Did you recognize the tie on that "Orange Guy"? 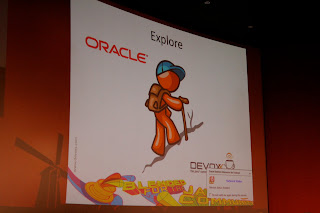 Next was a presentation of Adobe on their new Catalyst tool (Fc) - Chat Haase did a real nice stand up again.
The main breaking news of the day came from Mark Reinhold in his update for JDK 7. Not only will it take longer to get JDK 7 out (due to the obvious reasons) but it even may contain closures. So once again it seems closures is the new pink.
After lunch James Gosling had his un-keynote. He demoed the new version of the JavaStore promising that it will be available worldwide ASAP, but no sooner. 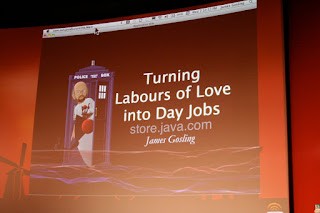 During James talk some novelity happened at Devoxx - the first time in 8 years the audiosystem broke. So James had to wait for them fixing the problem, but the Devoxx-Magicians got it up and running again in no time (=few minutes).
Next up was a JavaFX session with Rich Bair, Jasper Potts and special guest Tor Norbye. They showed the planned features for JavaFX 1.3- regions with css styling support, new enterprise ready ui components and some smaller enhancements for threading. The eyecatcher was the demo from Tor. He showed the JavaFX Visual DesignTool, written completely (100%?) in JavaFX. I have to figure out how to build such a large application without a platform like NetBeans RCP (have to ask Tor). It was a real slick UI with lot of effects and , as it seemed to me, with ease of use.
For the afternoon the sessions were ScalaTest and Project Coin. Bill Venners talk showed how easy it can be to write easy understandable test with Scala - but I agree with James Gosling - you have to hear it 5(?) times to get it all right. the Project Coin session did not reveal many new details but showed how the process worked, made clear that not only because it looks simple to do a change it is that simple (the JLS complexity indicator from Alex Buckley). One new piece of information was that they may be considering further small changes, e.g. multicatch, due to the slip of OpenJDK 7 release.
Only two BOF's for day 3 - the JUG BOF with James Gosling (a must have) and the JDK 7 BOF with Alex Buckley, Brian Goetz, Joseph Darcy and Mark Reinhold.
The main things I took with me? Well Java was invented to trick C/C++ programmers into thinking Smalltalk was cool thing and no Java is not the new COBOL.
For the evening we had a meetup (hosted by the NetBeans DreamTeam) at the Axxes - and guess who was there - Juggy!

Was real good to meet you all again!
Posted by Sven at 10:06 PM No comments: